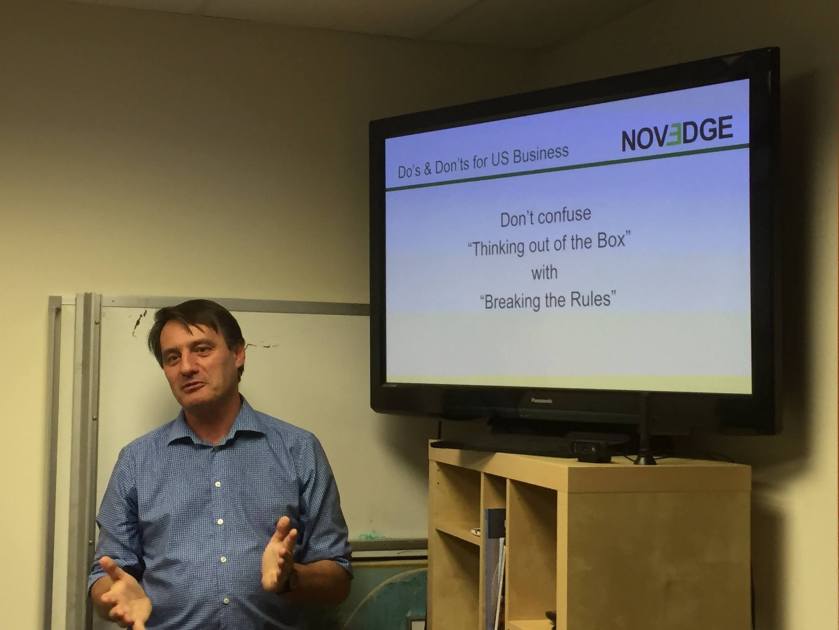 29 November 2015 Franco Folini Business, Novedge Comments Off on Do’s & don’ts for US business: the unwritten rules

Franco Folini 2015
If you can’t handle traffic, then you probably will not be that good at handling unexpected business events.
Rule #2

Do your own homework
before the meeting

Always have a
business card

Go into every business meeting
with a clear plan

If you need somebody’s opinion or help
be specific, ask questions,
then listen to the answer

Franco Folini 2015
Most of the time there is no point in stating that you hold a different opinion.
Rule #7

Never claim
you are doing it only for passion

Don’t interrupt
when people are talking,
don’t talk over

Franco Folini 2015
Doesn’t matter if that is acceptable in Italy, in US it isn’t
Rule #9

Don’t downplay your achievements
and accomplishments,
but please, no BS

Always reply to business emails
within 24 hours.
If you can’t reply right away,
acknowledge receipt,
then follow up with a complete answer

Franco Folini 2015
This is the golden rule. If you break this rule you are out!
Rule #11

Business dinners or drinks:
it may look like a social occasion
but it’s still business!

Franco Folini 2015
You are not there to eat or drink, you are there to do business
Rule #12

In a business meeting
nobody around you
is your buddy

Franco Folini 2015
Be friendly but don’t play like you are a buddy. People will think you don’t know what you are doing.
Rule #13

Nobody owes you anything!

Franco Folini 2015
You can get a lot from people, but you must be nice to them. Ask politely and don’t be pushy.
Rule #14

Americans have a concept of
“Personal Space”
different than Italians

Franco Folini 2015
Americans love to play by the rules and are very suspicious of anybody shows a different attitude.
Rule #17

You can be critical about your country,
but don’t be negative.
Americans are patriotic and they expect
everybody else to be patriotic

Franco Folini 2015
It is not cool to say bad things about your own country.
Rule #18

If somebody offers you a favor or a deal
that doesn’t match your needs,
thank them and politely but clearly
state that your objective is different

Franco Folini 2015
In Italy you can signal your lack of enthusiasm in many nonverbal ways. In US you probably don’t have the understanding of the culture to send a similarly clear nonverbal message.
Rule #19

Be prepared for small talk,
but keep it to a minimum

Franco Folini 2015
Small talk is part of the protocol. Do not overdo it.
Rule #20

Never, ever make a joke
if there is even a small possibility that
it could be interpreted
as an ethnic, racial,
sexual, or religious reference

Franco Folini 2015
Americans can be extremely sensible to bad jokes. Californians everybody, except very-close friends, to be always politically correct.
Rule #21

If you have bad news to share,
be nice, but explicit!
Don’t bury your head in the sand waiting for the bad news to disappear.

Franco Folini 2015
If you change your mind about a project or a hiring tell the other part ASAP.
Rule #22

I wrote a Chrome Extension to perform on-page SEO analysis

What Is The GAIQ Certificate, And How To Get It

How Difficult Is To Get the Google Analytics Certification?